Yao Qingmei: In the Name of Safety

Yao Qingmei’s solo exhibition “The Ecdysiast” is showing at Magician Space. After entering the gallery, we first see a narrow roped – off passage to queue for security inspection – we must go through a “rigorous security check” if we are to see this exhibition. There are cacti on top of custom made stanchions – their raised spines evidently suggesting aggression. Passing through this security check isn’t merely about checking personal belongings through, but visitors are obliged to lie on the conveyer belt to enter a dark space inside the x – ray machine. There inside, a recording of a soft female voice is playing, which appears to help the viewers relax their strained nerves, dispel their wariness and enjoy the seemingly “pleasing” arrangements in the dark. But at the end of the passage, a screen shows images from a CCTV camera inside the machine, which means that the previous moments when they were in the machine were visibly exposed to the public – this is rather frightening. Indeed, faced with such a strict inspection, the visitor can choose to turn around and leave. For, after all, no one can force them to submit to a security check just to enter an exhibition. On leaving the gallery, however, when they encounter similar situations in real life, this right to choose no longer exists. 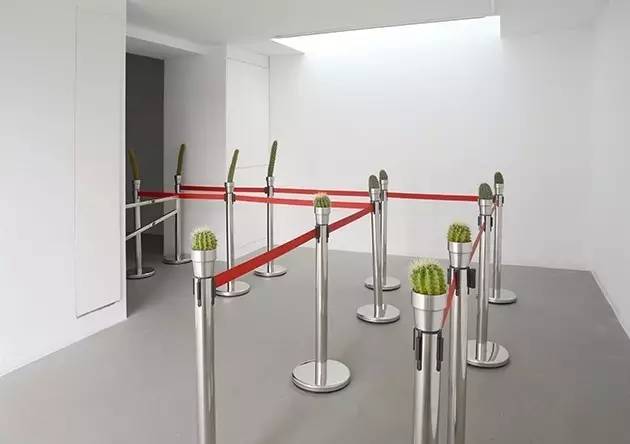 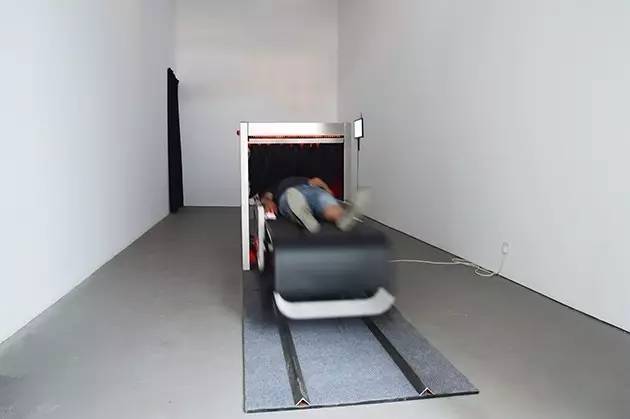 The Exhibition of "Yao Qingmei: The Ecdysiast" at Magucian Space

The whole process of the “security inspection” is a critical part of this exhibition – one has to concede that direct physical experience is more convincing than any mere words, for it extracts us from the ways and customs of life so as to reassess these questions of safety and privacy. Yao tells us that before the first World War there were no security checks but that, following the “911 Terrorist Attacks”, even the USA – a country that proudly associates itself with democracy and human – rights – instituted detailed and rigorous security inspections. Without doubt, in such a troubled world, security checks have come to be the universal norm. Everyone's individual rights must be surrendered in the name of safety. Now, constrained as we are, will there come a day when our privacy will cease to exist? 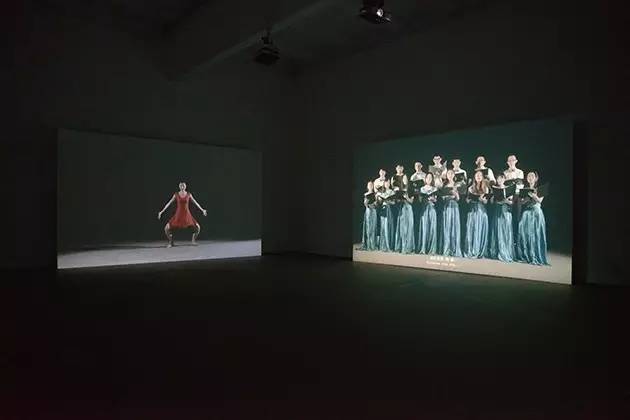 These ideas and the discussion of problems of security and privacy are carried forward in the three – screen video in the main exhibition room. The videos are presented in a theatrical manner, huge projections take up three walls, giving visitors a sense of being physically part of the scene. The projection in the middle, directly facing the visitor, shows a choir of fifteen people singing a song about “ecdysis (molting)”. To the left and the right are projections of respectively a female and a male dancer whose performances meld with the choir singing. The choir’s solemn style of singing is in stark contrast with the satirical nature of the lyrics, whilst creating a peculiar harmony, seeming serious but amusing – for this is the particular artistic style of Yao Qingmei.

The dancers’ performances are very expressive: the female dancer’s performance is based on a comic erotic dancer, a stripper, and depicts the act of undressing in order to go through the security check; the male dancer’s performance parodies the routine of the security inspection, with some additional mechanical movements taken from gymnastics. His facial expression too is cold as if, after dressing up in his costume, his human nature also gets covered up. At first, both dance solo on their separate screens before beginning to tango together. The tango is again a pastiche of the inspection procedure; under the guidance and control of the male dancer the female cooperates, complying to complete the inspection process. At the end of this frivolous examination, the choir and both dancers cry out in excitement “Give me a shot of Ecdysone!”, bringing the show to its climax. The scheme of compliance, starting with the body then the mind, is a sign that the powerful authority hiding behind the system of security inspections has triumphed. 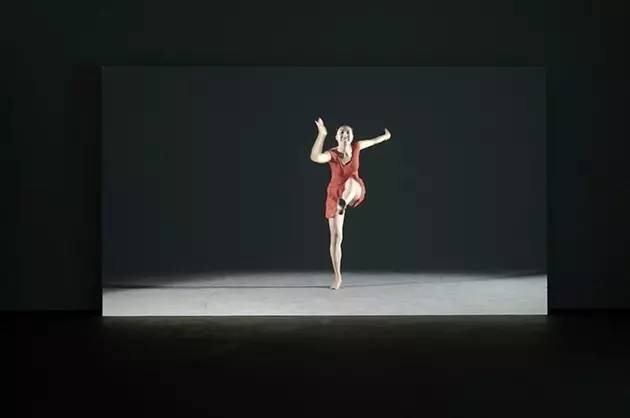 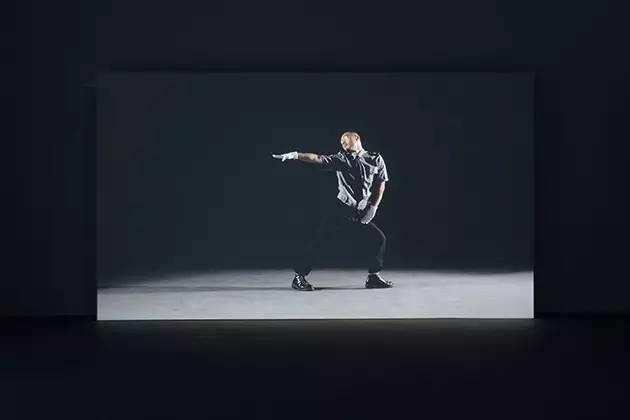 The format of the video work is borrowed from the triptych of ancient Greek theater where the choir in particular plays an important, central role. In ancient Greek theater, the choir is the voice of the gods, acting often as the mighty arbiter, giving judgments that conform to the moral principles and the deities’ edicts concerning the different characters, and all the while preaching to the audience. In the video, the choir also appears as a mxanifestation of the gods, through their singing, they conduct the performance of the dancers and establish a dialogue with the audience. Another interesting aspect is that the video contains many frames of eyes starring out – so that when the visitor views the work, they too are the subjects of gazing eyes.

In her previous works, Yao Qingmei often appeared as the performer. This time, however, she has chosen to work with professional dancers. She is of course in charge of the choreography and the songwriting – having carefully explained her ideas to the dancers and the music composer, in order to achieve perfect fusion of professionalism and art.  According to Yao, professional dancers have a great sense of control. At the same time, she also has tried to get the dancers to perform movements beyond their ability so as to demonstrate the fragility of the human body when out of the limits of control. This latter idea resonates with the themes of her work.

The title of this exhibition "The Ecdysiast”, from the Greek “ecdysis” , is just the scientific name for “erotic dancer or stripper”. The action of progressively exposing ourselves has become a norm that we all must endure. Yao tells us that starting from the 18th century the human body got tangled in a web of power and politics – we entered “a realm where our bodies are controlled by knowledge and intervened by the authority”. This is a global problem, our attitude towards the control of our bodies has been transformed – from refusal, to compliance, and finally indifference. By exposing ourselves each time, we give our consent to the authority examining us.